It is tail of the month and a thought may have gone through your mind, Gentle Reader, of what could she be considering in the gap between Thanksgiving and Advent. The Answer is whimsey. So I turned to the stars…the Zodiac to be exact.

Since November 22 the zodiac turned to Sagittarius. We will be under the influence of The Archer until 22 December. After much diligent researching, I have learned lots about those of you who are Sagittarians. 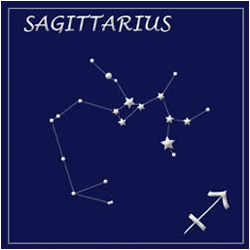 Those who are born under this star sign are considered the happiest ones in the zodiac. You are probably light hearted and happy-go-lucky. This manifests itself in an adventurous spirit and an optimistic outlook on life. Because of this drive for adventure, Sagittarians can be easily sidetracked and even a bit reckless. Does this mean you want to ride Flo? You bet!

Sagittarians aren’t idiots however (even if they want to ride fast horses!). They also have a deep love of learning — about everything. Their adventurous spirit means they also need variety in their education. They are quick to draw differing ideas together which can make them both very insightful and very witty.

Other bits I’ve picked up are:
Your colour is blue.
Your Day is Thursday
Your Planetary Ruler is Jupiter
Your Lucky Numbers are 3,7,9,12,21 (ooo! lottery numbers!)
You generally like freedom, travel and being outdoors
You generally hate clingy people, contraints, off the wall theories and details (hummm, that could make Dressage difficult).
You have big energy which you will turn to your big dreams.

Now, have any of you Sagittarians looked at your sign? Yes, the short version is an arrow with a line through it, but the real symbol is that of a Centaur. The Centaur who is far sighted and looking to the future. Very romantic.

I just have a few questions…..

1) How does Centaur anatomy work? Half man-half horse. Man to the waist and horse for the rest. Or horse from neck down and man from neck up. That’s a lot of beastie no matter how you look at it. So, do Centaurs have 2 hearts? 2 stomachs? 2 sets of lungs? Is The Doctor really a Centaur and not a Time Lord/Lady?
2) Considering the body mass of a Centaur, how much food do they eat? Taking Shannon and glueing her onto Mollie, that would mean a seriously large McDonalds order. And would Shannon have to be a herbivore? Would Mollie become a carnivore — more than she already is? And don’t even start me on the Beowulf-Charlie possibility…..!
3) Do Centaur’s equine parts also include the possibility of being zebra, donkey or mule? Would that mean you would be racially identified by your equine part or your human part? And what about Shetlands? Would that mean their human part would be a dwarf? I can almost see Peter Dinklage with an equine part that looks a lot like Mini Magic. Now that would make GOT truly interesting….

I’m sorry if you think I’m being a bit odd, but it is the Libra in me showing itself by having insatiable curiosity and see both sides of the argument. That being said, those of you Sagittarians riding with us, perhaps a Thursday lesson will be ideal and don’t worry about being cold — you’re a fire sign!

Until next week, keep riding!
Kimberly