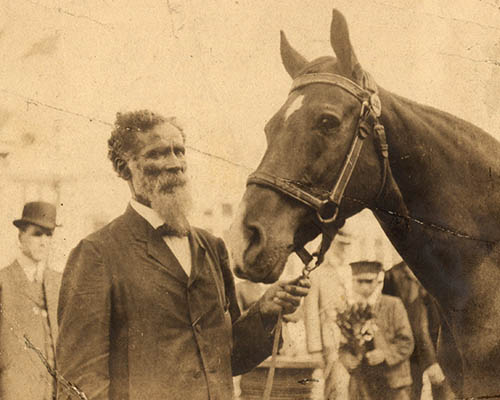 I started this story as a way of telling the tale of Beowulf’s Tango. I have always believed that the best way to teach and train a horse is by using love and patience. I have known for many decades that horses are very special and intelligent creatures who want to please and do their best for their riders. I believe that horses who are rude and mean are only that way because they have had many, many bad experiences and they are responding to that fear. This is where we started with Tango, but this is also where I learned about an amazing horse called Beautiful Jim Key. 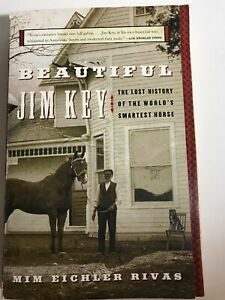 Beautiful Jim was born in 1889 in Shelbyville, Tennessee, USA. He was “owned” by Dr. William Key, who himself was an amazing man. 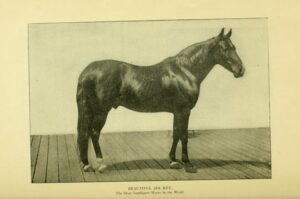 Dr. Bill, as he became known, was born in 1833 as a slave to the Key family of Shelbyville, a small town outside of Nashville. As a small boy, Bill showed amazing promise intellectually and his master, Mr Key, was moved to take the boy into his family and educate him properly. This was both almost unknown and illegal as the law forbade slaves 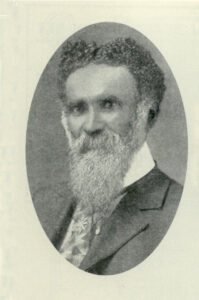 from having any form education beyond what was taught as part of a religious training.

When the American Civil War broke out in 1860, Bill joined the Confederate Army to protect his “brothers”, the white children of Mr. Key who he loved and in return was loved by them. Bill also worked as part of the Underground Railroad, helping fleeing slaves through blockade that divided North from South. Eventually Bill was caught by the northern Union Army and was charged with Treason. Somehow, not really known, Bill avoided the customary hanging and became the unit’s cook. In the evenings he would play cards with the soldiers – and he became very good.

When the war ended in 1865 Bill returned to the family plantation. He was shocked to see it in such bad order, but using the money he had won in his card games, Bill with the help of his brothers was able to repurchase the home. The family worked together to rebuild the land, creating a breeding centre and racetrack. During this time Bill became Dr Bill as he studied animal health and welfare. He also developed Keystone Liniment, a wide ranging rub for strained muscles and swollen joints that was good for both animal and human alike. It was a success and provided him a good income.

Dr Bill’s breeding programme had also produced fine, winning race horses. Dr Bill was well liked and highly respected, so it came a complete surprise that he would purchase Lauretta, a lovely Arab horse that came from a circus for $40. She was broken, neglected, underweight and of seemingly no real value, but Dr Bill saw something, “intelligent in her eye”. He took her home and cared for her carefully. When Lauretta was strong and healthy, Dr Bill breed her with his friend’s Hambletonian. At the time it seemed unfortunate, but Lauretta gave birth to an odd shaped, sickly foal who it seems she rejected and Dr Bill named Jim. Dr Bill was advised to put this foal out of his misery, but Dr Bill saw some “intelligence in his eye”. This horse would become the most intelligent horse the world had ever seen and was an intrigal part of the Humane Society.

Jim bonded with Dr Bill and his family. Dr Bill’s wife noted that the young foal was able to answer her question of whether or not he wanted an apple by nodding his head. He began to show responses like those of Dr. Bill’s young children and, in due course, even earned himself a blanket to sleep on in their house. It would be this way for the rest of this Bay stallion’s life. When Jim began to exhibit his quirky behaviour, Dr Bill thought it would be fun to teach him some tricks. Jim quickly mastered laying down and rolling over on command – later this would be his response to people when they asked him “silly” questions. He could also fetch, hand over objects, 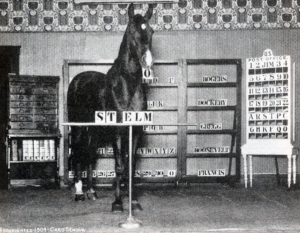 and after 7 years of gentle training, Jim could spell, add and subtract, do post office filing, make change, recognise bible verses, and answer random questions. Jim also liked to flirt with older women, which made him very popular when he began to tour with Dr Bill.

It was common to sell products such as Keystone Liniment by going to the various county fairs and shows. Jim did not like to be separated from Dr Bill for any length of time, so Dr Bill began to bring him along. Jim, who was now a very handsome, tall and strong horse, was to be Dr Bill’s assistant, but it was not long before Jim stole the show. Dr Bill would ask Jim to answer questions, which he did, but soon Dr Bill opened it up to the audience. Jim would answer questions as long as he was given a treat of an apple or piece of carrot.

Now Jim wasn’t the only horse on this circuit. There was also Clever Hans, who was owned by a German teacher named Helmut von Oston. Hans could answer what seemed like random questions, but it was actually a response from the body language of his trainer. A reporter from the Post Standard Newspaper was determined to prove that Jim was the same. The reporter was taken to Jim and Dr Bill waited outside. The reporter asked Jim questions and Jim refused to answer. When Dr Bill came back in and was told that Jim was a fraud, Dr Bill asked Jim why he was being so difficult. Jim spelled out “FRUITLESS”. Jim didn’t work for free. If you wanted answers, then you gave him fruit. The reporter was stunned and wrote up the experience declaring that Beautiful Jim was no fraud.

In 1894 Beautiful Jim was invited to the Tennessee Centennial Exposition where he performed in the Negro Hall in front of 7,000 people nightly. Although this was a hall reserved for black people, Beautiful Jim was such a draw that it was opened to everyone of all 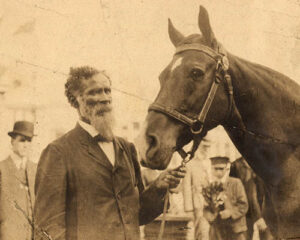 colours and he crowning moment was when he met United States President McKinley. Jim answered McKinley’s questions and told him what he though about politics. President McKinley said of the experience, “This was the greatest object lesson of the power of kindness.”

After the Exposition, Promoter (what we would call a Manager now) Albert R. Rodgers learned about Beautiful Jim. He contacted Dr Bill and promised to make them stars. He was as good as his word and the trio earned millions – in 1900 that was no mean feat. Beautiful Jim was valued at $100,000. In 1903 he had his largest audience of 22,000 people at a single performance in Kansas City. He had become the biggest box office draw from 1900 to 1905, a 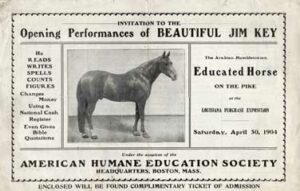 Beautiful Jim was more than a performer. He was also the subject of close scrutiny. Because Jim’s intelligence was so pronounced, he was studied by various medical bodies including the Harvard Board. After serious investigation it was decided that Jim did his “tricks” because he was very educated and they felt it was on par with that of a 10 year old child. They were amazed that Dr Bill never used violence or harsh treatment to teach Jim anything. By using love and trust, Jim was willing to submerge his head in a bucket of water and retrieve a quarter (a US coin about 2.5cm in diameter). Horses don’t hold their breath and stick their nose in the water!

Jim was also a major part of the Humane Movement. Once the organisation had decided that Beautiful Jim was no hoax, but a lovingly trained horse, the MSPCA Head George Angel supported Beautiful Jim’s endorsement. At it’s high point, there were over 1 million members of the Jim Key Band of Mercy. 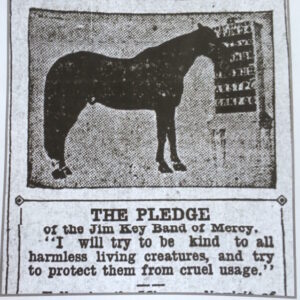 The children involved would take the Jim Key Pledge and “promise to be kind to animals”. This is an amazing thing as people in 1900 did not see horses as anything beyond a useful tool to be used and discarded when their usefulness had been completed. The Jim Key Band was able to raise $700 to purchase a horse ambulance in Boston for sick animals. The first of it’s kind. People began to want horses trained with love.

Beautiful Jim did have a best friend and body guard named Monk. He was a smallish terrier type dog who protected his friend fiercely. If you wanted to see Jim, then you had to be approved by Monk. Not even Dr Bill had the final say on that front! Monk can be see in many pictures taken of Jim sitting on Jim’s back. Jim would kneel down so that Monk could jump up on him. The two were inseparatable. 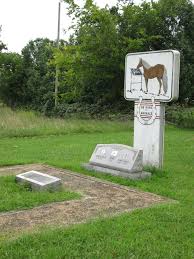 An amazing age for a horse in that period. Their lives together gave us today a wonderful opportunity. They began the serious study into horse intelligence and that study continues to this day. The use of positive reinforcement and supported behaviour have become the best and correct way to train. 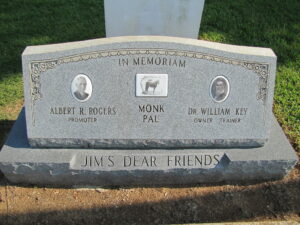 Today’s Beautiful Jim is Lukas, a 16/2 thoroughbred ex-racer who suffered massive tendon damage from his racing days. When he was 9 he came to his current owner after being passed from pillar to post, and by using positive reinforcement and patience, he is now the holder of the title of The World’s Most Intelligent Horse. His story can be found on YouTube.

So how does this relate to Tango? When we took on Tango at 7 years old he was an angry, frustrated and difficult horse. He kicked and bit and put many people into A&E (emergency room). It was a conscious decision that we were going to put him on the LOVE OFFENSIVE. I was going to love this beast into the best horse he could be. It has been 5 years now and Tango is an affiliated Show Jumper with a future to look forward to. He is happy. He loves what he does. He loves his people. Yes, there are days when he is a bit tetchy, but then we all have them. Because of love, patience, playful training, Tango has become an excellent horse and part of our family. He will never be a Beautiful Jim or a Lukas, but he has become and is still becoming the best horse he can be.

“The greatest object lesson of the power of kindness” and Love.