So This Is Christmas And What Have You Done 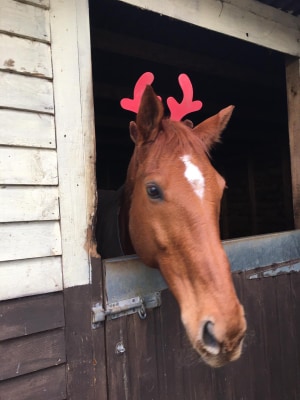 Yes, Christmas is upon us. It is filled with coloured lights and Christmas trees; elves and odd, bordering on hideous, jumpers; hot chocolate and RAIN.

If you are a non-rider, rain is an annoyance. It makes it hard to go anywhere as traffic is terrible. Your jacket is damp and needs to be hung in the shower to dry. Your car windows are always steaming up. And it is a constant and necessary run from shop to car and vice versa. Yes, it is a bit dreary and doesn’t make for a fun December.

Now imagine, or just recognise, that you have all of that and a horse. The fields right now can only be described as a mud-pit. They are past saturated and are now filled with enough standing water and mud slurry to bring to mind WWI. The wind is blowing the rain in your face and you have to collect your best friend in. I really don’t think that horses are intentionally being stupid when they stand in the middle of the field and ignore you calling them. Yes they look at you with a face that says, “Really? You want me to come over there?” They aren’t being horrid as such. They just know how much mud separates you.

I would also like to think my horses are considering my bank balance. It is December and Charlie KNOWS it’s Christmas. He wants a new 7 foot medium weight rug in his stocking (it’s a big stocking!). He knows he is standing on the only solid part of the field and as a 750 kg boy, he’s not giving it up. He knows that walking over to me will suck off 2 of his shoes and the money I spend putting them back on will mean he doesn’t get that rug. He is a smart horse. He knows that my wellies don’t cost anywhere near that. So he stands firm in the hope of a new rug. 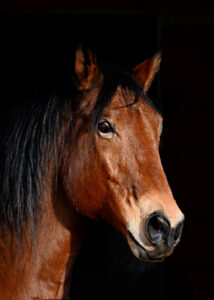 Once I have brought the beloved horse in, I then get the wonders of grooming. Well, first he has to dry out. I don’t know how he does it, but I turn him out in a rug to keep clean and he manages to get the mud up under the rug. So the mud has to dry so I can clean his coat. His rug has to dry too. That is even harder than getting the horse to dry because it is raining and humidity does not encourage evaporation. This is why he needs 2 of every rug – one to wear and one to dry. After approximately 90 minutes, Charlie is now dry enough to start the process of removing the mud. This is not going to be your standard rub and flick groom. The mud in my fields has an underlying component of cement. In my 90 minute wait, some of it has set. Charlie is now looking smug.

I get out the baby oil and begin to work it into the cement patches and they slowly dissolve. Now my hands are covered in oil and I can’t hold on to the brushes properly. After the 15th time of picking up the rubber curry comb, I am now becoming frustrated. The Grinch is making a move on my holiday glow. I reach for the mud comb and begin to apply it with vigour. Charlie decides that he doesn’t like his tummy fur being pulled that way and swings his nearly 18 hand body into me to get me to stop. He knocks over the only warm thing on the yard — my sacred cup of coffee. I walk away to make another and possibly to calm down.

I return after 10 minutes and continue at a more gentle pace. His body is clean. His mane and tail however look like a cross between a punk rocker and a mud wrestler. Baby oil makes it second appearance (can I buy stock in this suff?). I’ve tried specialist stuff which nearly bankrupted me after a British winter and I have tried standard conditioner which is supposed to help the hairs not break. Neither one did the trick. Baby oil is my friend. So we enjoy a repeat of my earlier experience with the only difference it is the mane and tail brush the flies all over the yard. Charlie just looks at me with patience and sympathy. I remind him this is all his fault. He snorts and returns to his haynet like the petulant teenager he is.

In the meantime, my son arrives on the yard swearing his head off. He tried to get his ginger thoroughbred in and failed. “Why do we have 4 foot tall fences when we teach our horses to jump higher than that? How is it he can jump in this mud? Why are our fence rails made of wood which can be broken by a trailing hind foot? And he’s lost a bloody hind shoe! I’m supposed to be hunting this weekend!” Apparently the Ginga Ninja had not only broken out but took a full on canter down the road. I reminded my son that he wanted a Cross Country horse. He glares at me then proceeds to try to pick the horse’s feet. By the time he is done, he is wearing mud to his elbows and Ginga Ninja has tried to kick him twice. 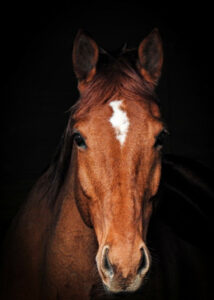 I take pity on the boy (ha! he’s a grown adult now!) and try to help. I get nipped for my efforts and I swear at the horse. Charlie looks smug again, and I tell him that his stable mate is about to become dogfood. I notice that the mud is now causing a small case of mud fever on Ginga’s hind right. I tell my son that it will need to be treated and fast if he wants to keep working the beast. We then have to wash the foot and dry it (remember what I said about getting things dry?) before we put the cream on. Son says he is glad that Ginga has mud fever because he can now stay in. I tell Son that he is buying all the bedding and making the stable repairs. Son not impressed. I then tell him that he has to go fix the fence Ginga broke. Son is now angry. I love being a yard Mum.

Charlie is now bored and irritated that he is not the centre of attention. After all, he is The Good Boy. So he begins to back up and pull on his rope. This tightens the knot. I know we/I use a quick release knot, so this shouldn’t be a problem, but a tightly pulled quick release is still a bugger to undo. I tell Charlie that he is not clever. Charlie tries to hug me and in the process pins me against the wall. And spills my now lukewarm coffee.

In desperation I take Charlie and put him to bed in his stable. He is happy, clean and dry. I look at his now damp, mud-encrusted rug to see if I can brush it off. He’s torn it. It has to be repaired. It can’t be worn until it is repaired. I want to cry. I know that tomorrow I will be fixing the rug and dealing with mud. This won’t end until March.