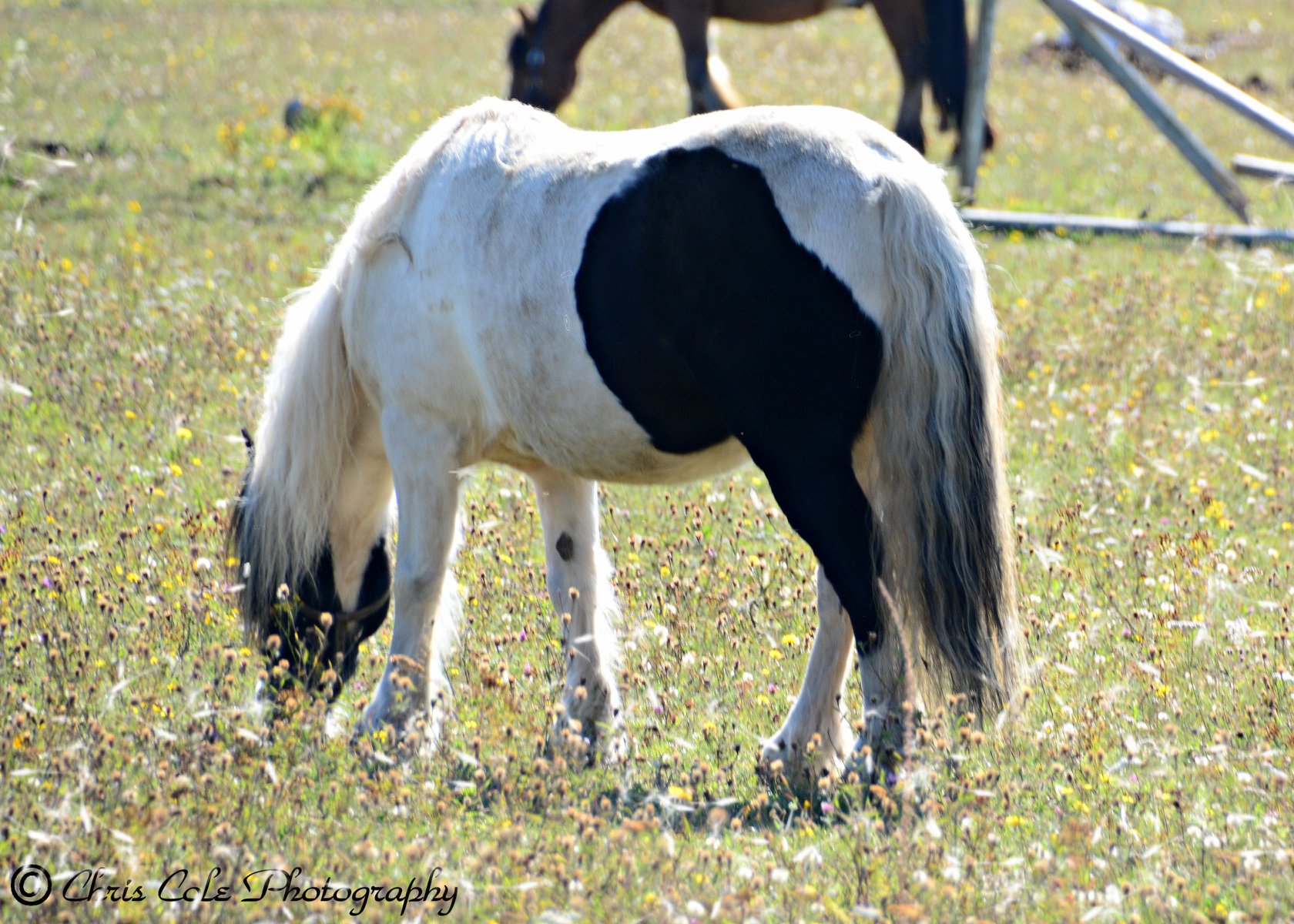 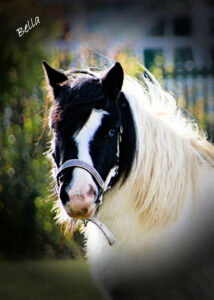 A refrain from a very well known musical goes,

How do you solve a problem like Maria?
How do you catch a cloud and pin it down?
How do you find a word that means Maria?
A flibbertijibbet! A will-o’-the wisp! A clown!

That pretty much sums up our Bella. A 11/2 piebald Shetland pony who should have been named Maria. Actually, her real name is Amethyst due to the amazing colour of her eyes. She is both loving and a handful at the same time.

Bella came to us as gift from one of our former riders. There was a change of circumstances and a loss of interest in this young rider’s life and her Mum felt that Bella would be happier in a place where there were people who would be happy to care for her constantly. We collected Bella out of her well kept field. And that is what Bella’s story is about – coming from a field into a riding school.

There are many things that a riding school has to take into consideration when they get a new pony. One of these is what the pony has done and what its potential for the future is. Anther consideration is how the pony lived and was treated. In no way was Bella treated badly – in fact, she may have been overly spoiled, which has its own set of problems. The last consideration we have to make is what the breed of the pony is as that comes with a genetic temperament and coat depth.

Bella is Shetland. Shetlands are amazing small ponies from the north of Scotland. If you know anything about Scottish weather, then you know that cold, wet and windy pretty much sums it up. I lived in Caithness for a while and I will tell you that you can add DARK when it is December and January. 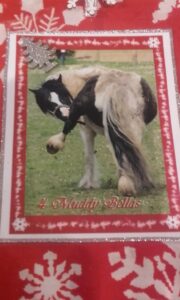 These study little ponies are made to live outside in this type of weather. This means that their coat is what we call a double coat – a mixture of both long and short thick hairs. This will keep the pony dry and warm. Shetlands also have a thick layer of body fat for the same reason.  Bella lived in a field for several years happy and warm without a rug. Riding schools use rugs to keep ponies dry and clean so they are always ready for their next ride. Rugs were new to Bella.

Shetlands come is various heights from very small at just 28 inches to rather tall like Bella. The one thing they all have in common is their speed. They are Usain Bolt of the equine world. To keep warm they like to run. And they are very, very good at it. Bella has this ability and a very cheeky nature, so trying to bring her in from a bit of muddy field is task no member of Sunshine eagerly signs up for. She can canter from the top of the Working Field to the bottom of Old Mares Field in 10 seconds. Poor Huw runs from field to field in about a minute. She is having fun and he is not. Once she has run this track a half dozen times, then she is happy to come in. Getting the energy out of a Shetland is vital in order to either school the pony or use the pony in classes. Because of this, Team Sunshine now lunges her daily and she is much happier and easier to work with.

Another aspect of Shetlands is their curiosity. Bella was not a stable dweller until she came to Sunshine. She lived in a field and could see everything. Bella must know what is going on. We have had to lower the top of her door because she took to standing on her hind legs with her front legs on the bottom brace of her door so she could see over. She even once tried to jump her door. This was rather scary! She will also explore every area of the field when she is out before she will settle to graze. She is our “gossip girl”. Once she knows everything, then she will be calm and relaxed. Until the moment Huw has to bring her in.

Shetlands are physically strong. Their purpose was to help carry things for farmers such as bales of wool or baskets of coal. I’ve seen them on beaches to help draw in fishing nets. They are perfect for pulling small carts or carriages that carry several adults. This strength can make a Shetland a real asset, but for a riding school it can also cause problems. 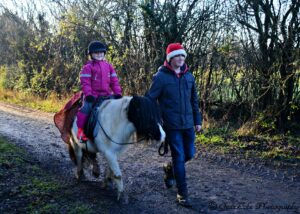 A horse that is strong enough to pull a cart with the same number of people as in the Lead Rein Class, can be hard for a Handler to control. The Handler could be dragged or pulled into areas where they don’t want to be. The Shetland’s strength could frighten small children who are just beginning their equine experience. So it is important that a Shetland Lead Rein pony is well trained and understands its job. A Shetland can work in a riding school for up to 20 years, but the first few are the most challenging. Bella has worked with children but she is now learning what it means to work in a group, and this is very new to her. At Sunshine we aren’t just training riders, but we are training horses as well.

So understanding the breed is very important when choosing or accepting a new pony. 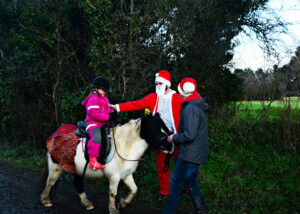 We knew with Bella that she had worked with children prior to coming to Sunshine. I suppose I should mention that Bella is only 7 years old, so she is still rather young and will probably live to 30. Because Bella is very small, she will only have the youngest of riders so she will not be expected to jump. It would be nice if she could do some dressage, but having a 7 year-old child doing dressage is a bit of an ask!

Bella is adorable. As previously stated, her almost purple eyes gave her the name Amethyst. This, coupled with her signature slow blink, creates a mesmerising effect. 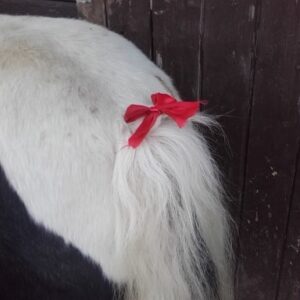 Bella loves attention and will give kisses over her door if she recognises you. When she loves you, her affection knows no end. I don’t know about you, but I often get June and Bella confused, possibly because of their black and white colourings and heights (however June is growing fast). But more on that later. With this said, Bella is utterly adorable….until moulting season.

Moulting season is an interesting time for all the horses on our yard. It happens typically around late spring but can be as early as March. While any horse moulting can be annoying for the staff, Bella takes it to a new level, as she transforms her stable to the inside of a vacuum cleaner. The loss of her double coat means there is fur and hair everywhere including the ceiling. Because Bella lived outside in the field, she was never clipped and naturally lost her coat. Because she did not learn about clipping as a young horse, she refuses to allow us to clip her now.  The one most affected by this is our poor farrier who ends up wearing as much fur as Bella when he is trimming her hooves (Bella doesn’t wear shoes). Bella loves having her nails done!

Bella is actually a big mare in disguise. She loves to hang around with Magic and Annie. This of course makes things a touch more visually complicated as Magic and Annie look alike and so does Bella and June. Who’s the Mummy and who’s the baby?! 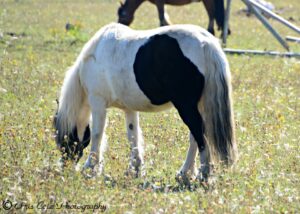 Bella tries to be the Dominant Beta Mare, so she can be Magic’s right-hand lady. This irritates Dora who thinks that is her position. Little do they know that Magic couldn’t care in the slightest. Because Bella is very smart, she out-thinks many of the smaller mares and likes to herd them around the field. Yes, she is a bit of a bossy-boots.

Having come from the field into the riding school, Bella has progressed well. She does have her moments and is very clear about not liking Pasha. This is okay since we know about it and will try to keep the two of them apart. We all have people we don’t like to work with. We have also had to introduce a new saddle to Bella as some of the riders are too big for the child saddle she came with. Bella, again, is not too pleased with this new clothing (such a fashionista!) and we are hoping to find her the perfect saddle soon. In the meantime, we are back to small riders using the child’s saddle. So far we have not really worked to teach Bella to canter as Shetlands can be that touch fast, as I mentioned. 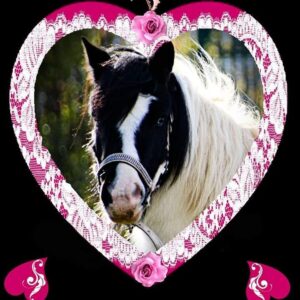 In conclusion, Bella can be both cuddly and dominate, loving and scary, fast and cheeky all at the same time. Bella is a high school mean-girl in the body of an 11/2 pony. But we love her that way.

This post has been made possible with the help of Chris Cole Photography.  Thank you Chris!