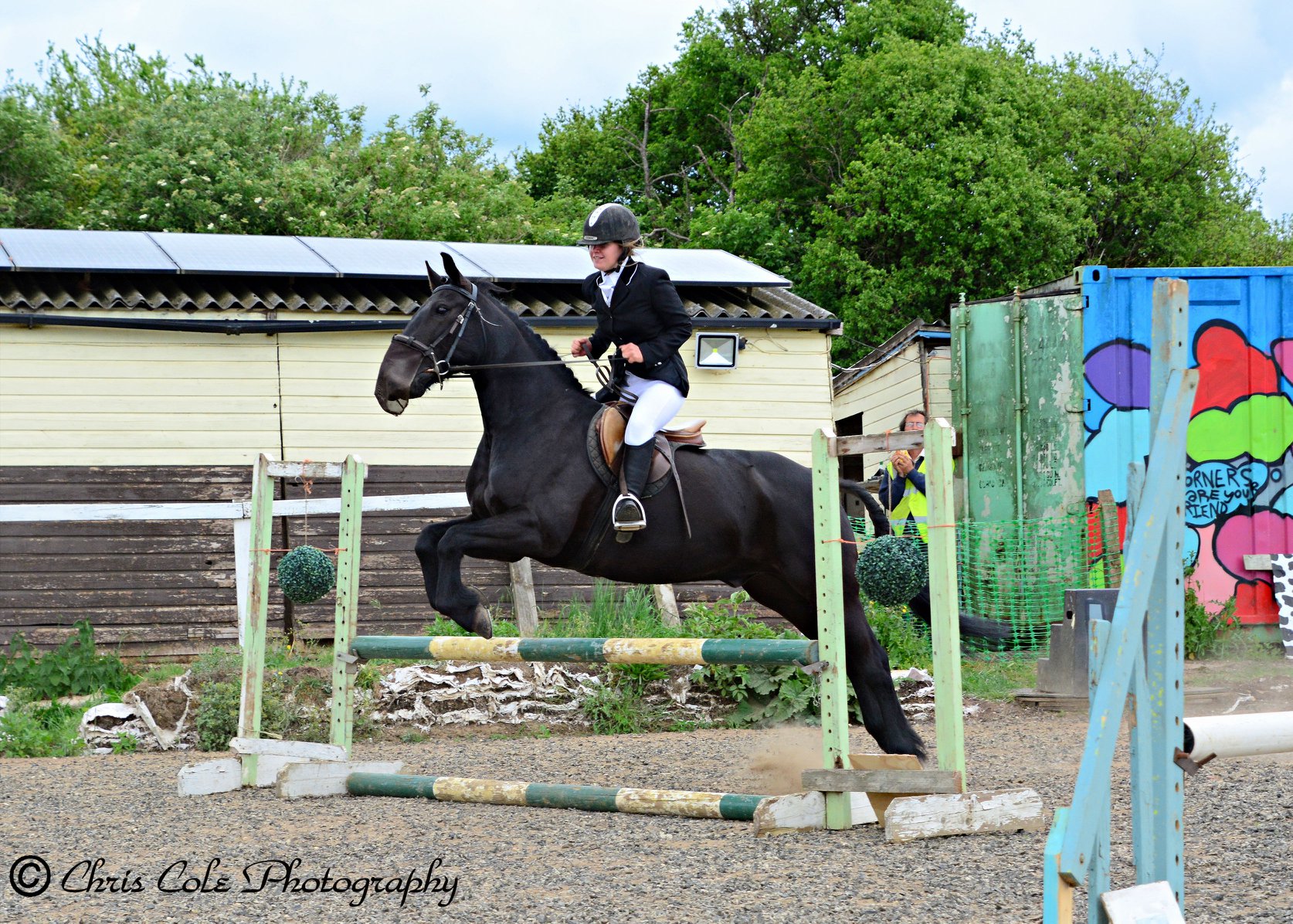 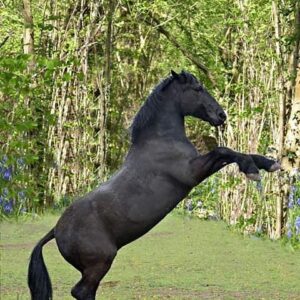 The first weekend of September is very important to the teachers at Sunshine. It is “Burghley Weekend”. From the Wednesday before to the Sunday, Stamford England and Marquis of Exeter host the Burghley Horse Trials. It is a 5-star international event that features the top eventers from all over the world. It is an amazing experience that I thoroughly recommend to anyone who is an equine lover. You will see some of the very best dressage, cross-country and show jumping. Henry is a “Burghley Horse”… just not the type you might be thinking of right now. 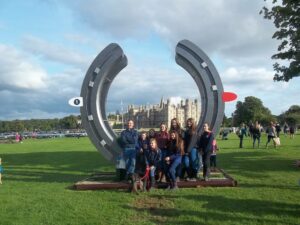 I, Kimberly, have a small addiction which I really don’t know if I will ever be able to kick. It starts in August of every year with me saying that there is simply no way I will buy a horse before I go to Burghley. The Sunshine Staff vacillates between, “That is right. You will not be getting one as we do not have space for another horse.” and “Yeah, right. You really believe that you will not be buying a horse this year? I’ll believe it when I see it.” Currently, six years on, there are far more staff members in the second camp than in the first. In fact, they are now placing orders for the type of horse I am to buy. I don’t go looking. The horse finds me.

Drumcoe Henry is one of these very special “Burghley Horses”. Henry is the second of our Burghley Bros. Donny, who now belongs to one of our former teachers, was the first. Five years ago, 4 days before the horse trials, I received a call from Fiona, now our Senior Teacher but then was working for a horse dealer. She told me that she had just had the most lovely 13 hand, 5 year old pony arrive and that he would make a lovely replacement for Smartie who I was retiring that year. I went down and looked him over. He was exactly what Fiona had said. He was a lovely, young and a bit unsure but a very willing boy. We agreed a price and time for me to collect. It was the morning of Burghley when I adopted him and he came to Sunshine.

And the fun began.

Burghley was great fun and Henry, who was in quarantine, caused the yard no problems. When I got home he was ready to come out of quarantine. 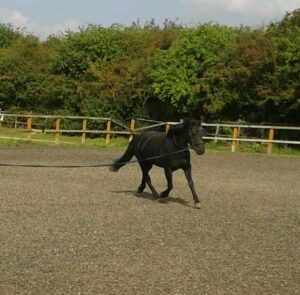 He was lovely on the lunge and eager to go. I did note that he had a ‘dishy leg’. This means that one of Henry’s legs goes out more sideways that front-to-back. I spoke with the Farrier and asked what could be done, and in his professional opinion it was too late to do much as Henry was 5, soon to be 6 years old. Proper training was our only recourse so that the dish didn’t become worse and that his transition from walk to trot would be smoother and more manageable. We were also told that his transitions were awful because he used to be a trotter – in other words, a gypsy cart horse.

I took Henry to an autumn pony ride at a local school. There we/I met a man who declared himself to be an Irish Jockey. He looked Henry over with a very keen eye. He asked me what I though (note “what I thought” not “what is”) Henry’s breed was. I said that he was a Cob. The man shook his head sadly (I now recognise that as well) and said that “this boy is a Trekhanner”. This jockey went on to tell me that Henry was 3 years old and would, due to the size of his shoulder blades and the length of his cannon bone, grow to 15/1. Now you must realise that I was not about to take this man seriously. I mean, really now, how many Irish Jockeys does one meet at a local school pony ride? I have spent years ruing the fact I did not ask him more.

I felt from that point onwards that Henry believed that he had the support of a fellow Irishman, a jockey I never saw again, and began to grow. Yes, Henry is Irish with an Irish Horse Society passport. (Maybe I do have thing Irish horses? We do have several….) It was right before Christmas when Shannon came into the office and announced that ‘Baby Baby Henry’s’ rug no longer fit. I went out to his stable with her and was greeted with a very smug face from Henry. Shannon was right. Suddenly the rug was too short on the bum and tight across the shoulders. Obviously we got him another rug and I went into denial. After all, what did a random Irishman know?

This pattern started and went on for over a year. Henry kept growing. Shannon was in 40 shades of love with Henry, so every movement, every trip, every slight change was documented. She spent a lot of time with him and I am grateful for that.

In January of 2016 we had our Vet Inspection. If you have read Pasha’s Story, then this will sound familiar. Our Inspection Vet, Mr McFairlaine, came and was inspecting our horses. He came to Henry and asked me how old this horse was and what was his duties. I said that Henry was 6 and was a general school horse. “Come again? You say he is six?” said the sceptical Scotsman.
“Yes.” I swallowed, “But I was told by an alleged Irish jockey that he was rather younger.”
“You should have listened. This horse is just turned 4. Come here and let me show you his teeth.” Needless to say I complied in a rather embarrassed fashion. I knew he was under 7 because the hook that forms at that age hadn’t appeared. What I didn’t know was the size of the black spots on the bottom front teeth also can help tell you how old a horse is. What had his previous owners done?

Now I was also beside myself because I have no problems jumping and teaching jumping to a horse who is 5 years old. 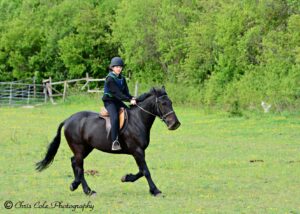 His back is developed and his muscles are strong. His legs are more permanently developed and any growth would be minimal. He is more mentally composed. As I said previously, Henry began a growth spurt that seemed to have to no end, which means his training was going to have to change immediately. A lot more lunge and flatwork with a lot less jumping.

I did speak with the Farrier again regarding what could be done for Henry’s dishy-ness as he was not the age I thought he was. The Farrier assured me that nothing could be done as it would have had to been done in the first 18 months. It would waste my money to have any type of remedial shoe as it would accomplish nothing. So we kept working on the flatwork.

Henry has been star. In the summer of 2015 he competed in his first dressage show. He was willing and sharp.

He wanted to win. He did our inaugural June Jump in the 50cm Class and came 3rd. What I noticed at that show, which unlike lessons where I have more control over what the rider does, was that Henry ran at the jumps rather than set himself up to jump calmly. This was an age thing but also something I knew I had to help him with.

So we starting working with Henry on lots of ground poles.

It was a cross between desensitising him to them and building his balance. Unfortunately 2016 wasn’t a good year due to a serious injury on my part, so Henry’s training along with everyone else’s was set back until I returned in 2017. I am grateful that my lovely staff were able to keep things ticking over, but they were young and not so sure about what they should be doing.

I was able to watch Henry in the spring of 2017 and saw that he had grown more. He was now 14/3 and much more powerful. His transitions were still erratic – it wasn’t so much popping into trot as being thrown into it. His transition to canter was him zooming up to almost galloping.

It was clear that he had to learn the different paces and know he could use them to balance himself and have confidence in what he was doing. It is important that your horse knows his skills as much as you know yours. An unconfident horse is actually a dangerous one because you don’t know if he trusts you or what he is about to do. Henry’s run-outs were the cause of a lot of accident reports, but fortunately no one was seriously hurt.

I starting using Henry’s schoolwork as a way to train him. He was and is used in our Lead Rein and Beginner Classes where we teach new riders how to ride in walk and trot. 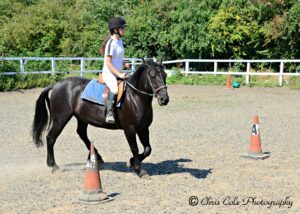 Because he is on a lead rein held by a Handler, he is not able to rush his work and has become more confident at working in a slower pace. He is relaxed in walk and (almost) has a smooth transition to trot. He is also used in our Upper Novice, Intermediate Classes and Advanced Private Lessons. Here is where we teach both Henry and his rider about proper jumping technique, collection and extension in the paces, softer hands with stronger legs. Henry has been loving this work. It is also where we teach the rider to have real awareness of their horse.

Henry is a sensitive soul. He worries a lot. He wants to do well and when he kicks a pole it hurts him more mentally than physically. He thinks that dropping a pole will mean that we are angry with him and won’t love him. Now you may say, how can you tell this? The answer lies in his carriage – his eyes enlarge, his head goes up, his back hollows out and he runs in fear. It takes a lot of confidence as a rider to halt him and “talk him down”. Give him the love that let’s him know that a dropped pole isn’t the end of the world. It is just something that happens. Henry’s fear is simply an age thing, but we don’t need it to become an ingrained response. Because we want the best from him, we do have to use the best, most confident riders we have when he is not on a lead rein. By using this method with him, throughout 2019 Henry blossomed into the second most requested horse on the yard.

Henry is now 15/1 (that Irish jockey was so right on so many things!) and he is OFFICIALLY 8 years old. He still performs in dressage through the Novice Tests, but will always be marked down for his dishing. 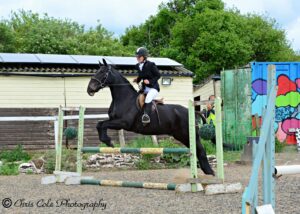 He now confidently jumps to 85cm and will be working towards 95cm this summer. He will be going out this year to local competitions as his training now has him confident in what he is doing, and positive in outlook and action. Henry is a brilliant hacking horse and loves his pub rides. He is a beautiful horse that is lovely is body and temperament. Baby Baby Henry is now a Big Boy Henry, but he still loves to play with his friends (which does get him into trouble with me on occasion!). If you ask, then he is willing.

I’m so glad that I go to The Burghley Horse Trials if it means I get a Henry in my life.

This post would not be possible without the photos from Chris Cole Photography.  Thank you Chris!