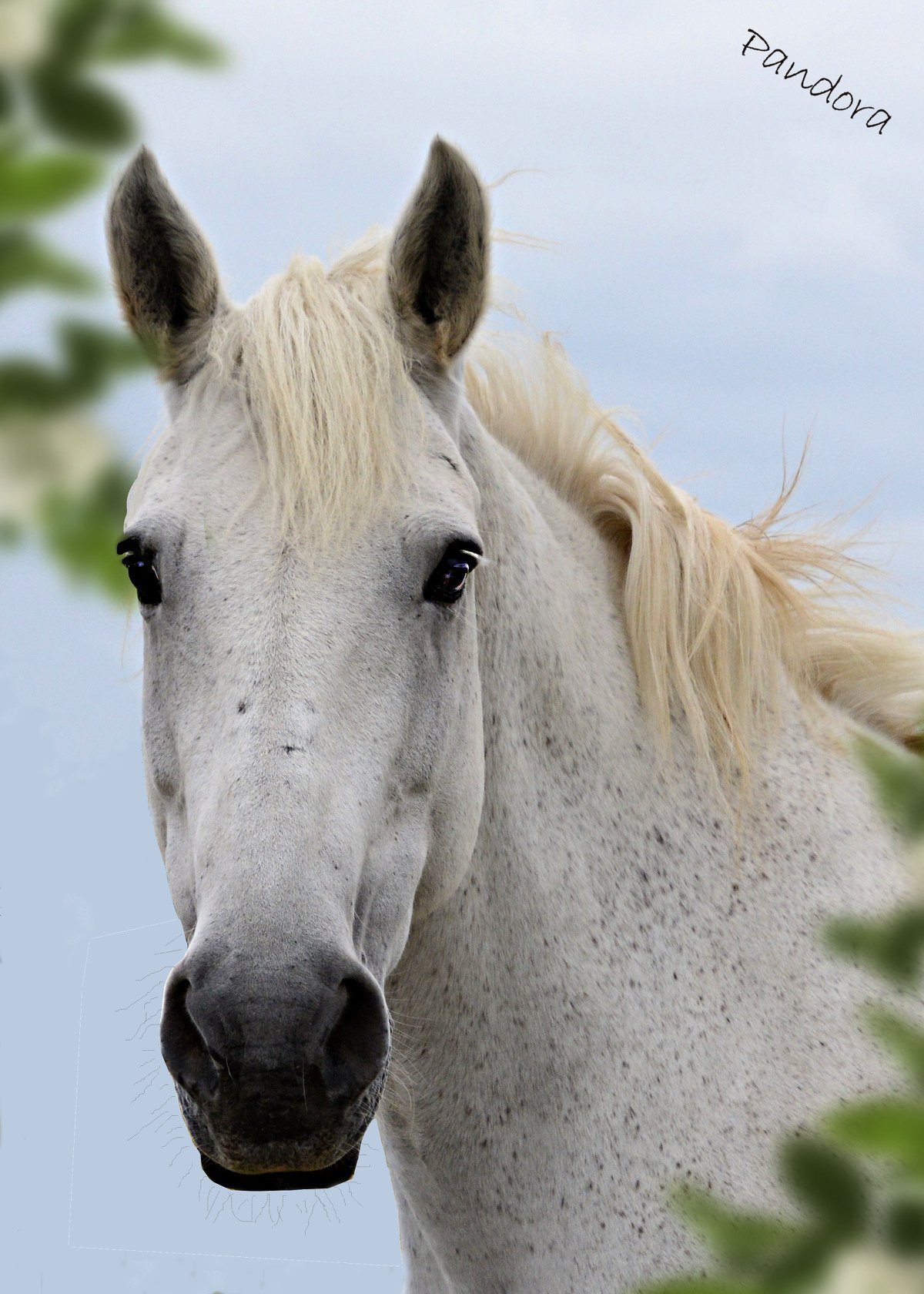 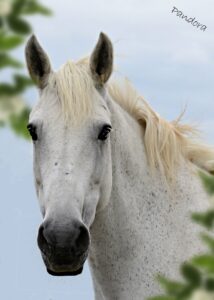 We all probably know the story of Pandora. She was the first human woman created by Hephaestus on the instructions of Zeus to punish mankind for stealing fire from the gods. She was endowed by the gods with beauty, grace, talent, knowledge…and a box. We know that Pandora was told to never open the box. Temptation proved too much for her and she did open it, and out of the box came all the evils which plague man. At the bottom, almost unseen, unnoticed, was Hope. And it was with Pandora that hope was released into the world.

So how does this Greek myth tie into our Pandora?

Pandora is a soft eyed, 16 hand, grey freckled cob. She is beautiful, graceful, talented, gentle and innocent. Pandora, also known simply as Dora, is 14 years old. Dora brought with her, not in box but in her heart, a gift of hope.

When Dora arrived at Sunshine I was looking for another strong but gentle jumper. I had seen pictures and video of her jumping and I thought she looked like a good fit. 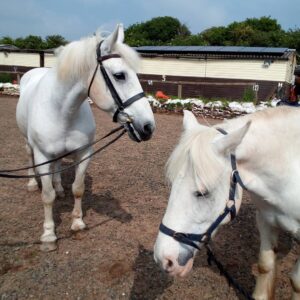 We had just retired Tink to a new home in a field of very deep grass. I knew that Tink was happy so I had space to bring a new girl in. Dora came from up north near Doncaster. I had been told that her previous owner had been injured (not a riding accident) and was also pregnant, so riding was out for a long time. The owner was hoping that Dora would have a chance to develop as she was still a young horse. As with everything, Dora arrived with her own ideas.

Once Dora had settled, we began working with her. As to be expected, she was a complete mess upon arrival. It was clear that she had just come out of a very muddy field! It took several days and as many baths to get her grey again. 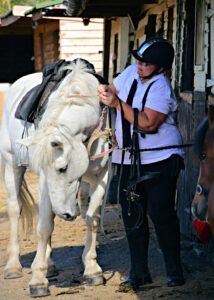 It was a bit of a surprise to find out that Dora was not keen on being tied up. How were we supposed to groom her when each time we secured her to a tie-up point she would back up and start shying? Being sensible about the situation meant that one Handler would hold Dora and another would groom her. Dora was fine about this and has come to love her grooming time. She now can be properly tie-up, but we must never leave her alone that way on the yard.

Dora’s jumping became something I began suspect wasn’t all it was cracked up to be. Dora can jump (unlike Rosie), but she didn’t enjoy it. When it comes to jumping, it is a discipline that both the horse and the rider have to love to do. A horse who doesn’t want to jump will frustrate the Rider with the result being an over use of the whip. A Rider who isn’t confident with their jumping will find themselves in a possibly dangerous situation as their horse will take control. 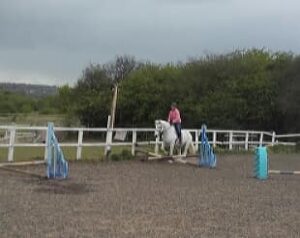 Something a potentially dangerous should not be left to a creature who has a brain the size of a clementine. Dora was fine jumping if she had a very confident Rider who know what to do and could lead her safely over the fences. If there was any sign of trouble, Dora would always run out to her right (I learned that rather shockingly as I was on the wrong side of a jump once. Only Once.) This tendency was not the best for a riding school. As she was 12 years old that that time, I wasn’t sure I could bring her on fully to enjoy jumping as I had riders to train at the same time. Major dilemma.

It wasn’t long before Tuscany was retired for the riding school and went to live is a big green field nearby. When Tuscany left, I knew I had an opening for a dressage mare. 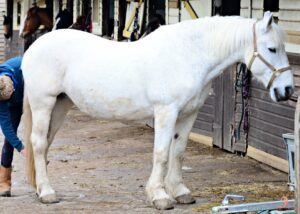 I had noted that Dora was naturally very flexible through her shoulders and forelimbs. Dora was (an still is) as happy moving sideways as she was going forwards. Dora also seemed to understand how to bend properly through a 20 meter circle with very little training. Her upwards and downwards transitions between the paces was easy. Most importantly her ears perked up and went forward when she was brought into a jump free arena for a flatwork lesson.

This is where Dora becomes Pandora and brings hope. I began to seriously introduce and train Dora in flatwork and dressage in Summer 2018. In the beginning both she and her riders were a touch green. You can practice and practice your Test, know it inside and out, but it in the heat of competition that your depth of knowledge and experience is honed. If I, or any other rider, got on Tuscany and felt a bit nervous, Tuscany would say, “Don’t worry. I got this.” It was comforting to know that she would do that …. right up to the moment she would slip from one Test into a completely different one. 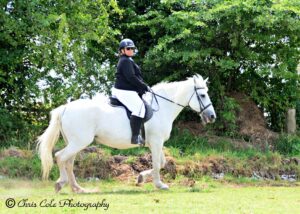 That kind of equine confidence comes with lots of work and experience. Dora has been learning that. What were once unprepared moves in the heat of the moment have become smooth changes of gears. What was once a frightening mass of humanity have become her adoring fans. What were once 5th and 6th place rosettes have become 1st and 2nd.

Another wonderful thing for her is that she rarely sees or experiences a whip. Because she is willing to do the work, there is no need for force the issue. She is now happy to do Lead Rein and Beginner lessons as much as her private Dressage Coaching. She has learned how to help people who are just starting out gain confidence and love riding. Her gentle nature means there little to fear from her when learning how to steer and balance for a trot. 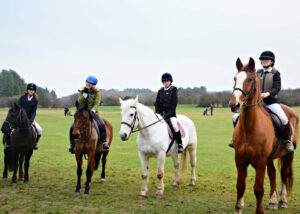 Dora has learned how to hack out and enjoy it. She hasn’t to date made it to the pub, but it is on her schedule for this summer. Again, because it will be fun, she will not fear it and in turn, neither will her rider. However the rider does need to be aware that she will try to take a grass snack for two on the ride.

All this praise does not mean she doesn’t have her cheeky side. She is one of the few horses that comes with a perfect internal clock. If the rider asks in Dora’s presence how long their lesson is and we teachers answer, “half hour” or “30 minutes”, you can count that Dora will be heading down the centre line to a finish halt at that point exactly. If we say, “oh, you have 45 minutes today” or “this is for an hour”, again Dora will finish exactly at that point. 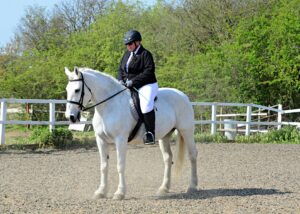 Don’t try to sneak another move in. She won’t have it. What she will do is start to canter the arena in a fit of pique. Not a lot of fun if the rider isn’t that accomplished. And as I said, Dora can go sideways as easy as forward, so one can quickly learn how to sit a half pass if Dora is in a mood. Dora also still refuses to go over poles even if they are lying on the ground. This is not a fear issue, but now very much a “mare issue”. Dora will be learning her groundwork poles- end of sentence. So there are times when the horse that looks like an angel can be a right little devil!

As for moods, our Dora is quiet one. She can be shy and doesn’t actually like a lot of people around her (unless she is doing a show and then she likes to be a Queen). If she is feeling unsure or crowded, Dora will hid to the back of her box with a very worried expression on her face. 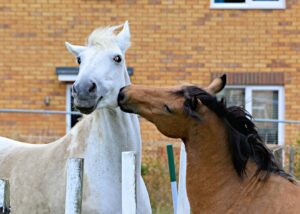 Dora is very sensitive to loud noises, so during firework season (now September through January!) it is important that one of her favourite people are up here and with her. A comforting hand on her face or neck does wonders and she relaxes. Dora also is a mothering auntie to June. She was profoundly affected by June’s birth as she was next door when it happened. Dora has tried and occasionally been successful with caring for June. As June gets older and bigger, I am sure they will have a good relationship.

There are many mean jokes about grey horses. Sunshine’s Pandora defies them all. She is clean, kind, gentle and loving. She wants children and adults to have a good time when they are with her. Her expressive and caring face says it all. Pandora gives hope and love to all in her orbit and in exchange we hope that she knows how much we love and value her. She is a gift to us. 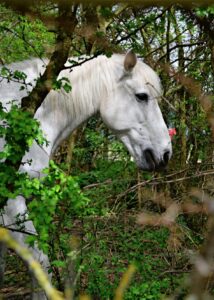 This post would not have been possible without the beautiful photos from Chris Cole Photography.  Thanks Chris!