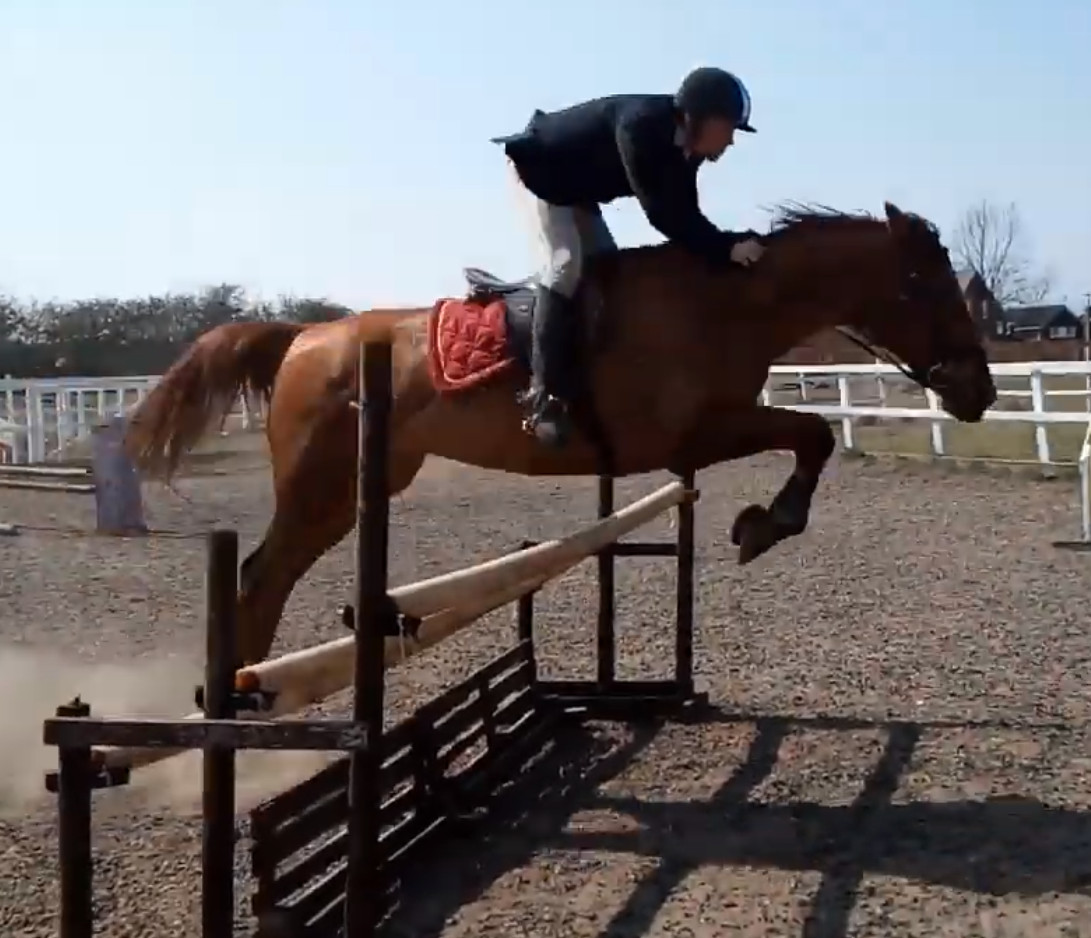 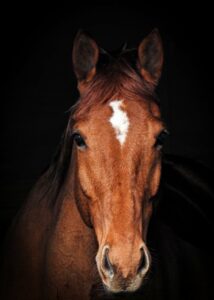 On Friday the 13th of April 2007 Chestnut Colt 13 was born. I wasn’t there. I don’t know much about the early years of this Irish Thoroughbred except he had a tough beginning. I know that he was born on a racing yard – this alone is a situation that makes early life for any horse hard. A bit like his owner (Beowulf), Chestnut Colt 13 has an American mother and an Irish father. His bloodlines are excellent (the horse that is) and Chestnut Colt 13 should have been an amazing racer. But he wasn’t.

When Chestnut Colt 13 was nearly 3 years old someone decided that a racing career was not his future and sold him on to an eventing yard. CC13 stayed there for 2 years before he was sold on due to his eyes (more on this later). He was deemed talented enough and fast enough but the eyes were considered to be a possible deterrent for a professional, high level show horse. But they were wrong.

When he was 6 he came to Sunshine. Because he is bright (and I do mean bright!) orange, he is called Tango

.  When I met him, Tango was a very unhappy horse. He was being used in the school for adult Lead Rein and Beginner classes which he very clearly hated. He was known for biting and kicking. One took their chances when it came to hanging up his hay net. My first summer of working with him was the most challenging times I had ever had with a horse.

The summer of 2014 I taught Tango how to jump properly. Jumping properly is not just getting from Point A to Point B over Obstacle C. It is about rhythm and balance and confidence.

Everything that Tango had lost, if he ever had it at all. All the while of doing this, Tango fought like a demon anything I tried. By August I had decided that I was going to sell him. He needed a home where people would put him first and he would not be shared around. Unfortunately Tango’s reputation preceded him and there was not a single serious offer for him.

As I sat in slight despair as to what to do with Tango in January 2015, it came to me that maybe there was a reason he was still at Sunshine. Perhaps I was the one who was to save him and give him the chance he had been denied all his life.

I walked down to his stable and looked at him hard. Tango glared at me with his ears pinned back to his head, teeth at the ready. I stood a sensible distance away and asked him, “Do you really want to be a great horse?” He snorted and twitched his ears forward and back in a flash. “Are you going to continue to fight me tooth and nail?” He swished his tail and “air chomped” at me. “Well, that behaviour is just going to have to stop. We can do this or you will die.” I walked away.

I went into the office and Simon walked in – that man may have some eye issues but his hearing is unbelievable. “Are you actually going to call Courtney’s?” “No,” I replied. It was at that moment the “Love Offensive” was born. I was going love that stubborn, stupid Irishman into being a great horse. “I’m taking him out of the school and giving him to Beowulf.” Simon nodded and muttered something about how this was going to be interesting.

So it started: The Love Offensive.

The key to this is to not respond to any provocation from the horse with anger or violence. Starting with an air of bored indifference when working with animal rather than trying to push love on them was important. Someone who doesn’t trust you isn’t going to accept that emotion from you. They have built high walls around themselves for protection and you are not going to get through them until they let you. This is the same for horses and it is for humans. This doesn’t mean that you don’t talk to them and treat them civilly, but that you don’t try to buy or force an emotion.

Now I will say that this was hard going. In March Tango bit Wulf so hard on his ribs that Tango’s teeth went through both the jacket and shirt. 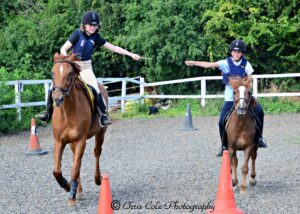 This resulted in a trip to the hospital, gauze, some sort of fake skin plaster and a jolly good tetanus jab. Wulf wasn’t so sure that he wanted this horse, but he, like his mother, isn’t one to give up quickly. So we carried on. Tango repeated this behaviour to Wulf’s girlfriend at the time 2 months later. It was like he was trying to push us away so that he wouldn’t fall in love. Tango did not want to get hurt and was going to make sure he wasn’t. He had never met the McGuinness Resolve.

We continued with our efforts. We found a muzzle for him so we could be safe when grooming him. So he took to kicking. We took to 2 man grooming where one would hold a foot up and the other would do the brushing. It took a couple of weeks, but Tango learned that we were not intimidated and he was going to lose.

We knew we had won when he picked his leg up for us when we came to groom him. It took several more months before he realised that he wouldn’t have to wear the muzzle if he would let us groom him without incident. Five years on and Tango now gets the hump if we don’t groom him!

Once we could groom him well, we then started on serious education. When I say we, I mean Beowulf, Tango and myself. Wulf and I would spend half an hour with Tango 3 times a week working on a rotation of general schooling with poles, dressage, and jumping. Tango began to love these sessions because they were mentally challenging to him and he received the praise and acceptance he so desperately wanted but never seemed to get.

In 2015 Tango went from jumping 50cm to jumping 80cm, from never doing a dressage test to working at upper Preliminary/lower Novice test, from fighting the hand and leg to working in an outline. He also was happy to accept praise from me in the arena.

The year 2016 was a bit of a blot on the page due to my accident and everything in the yard went on a holding pattern. When I came back in 2017, the first lesson I taught was with Tango and Wulf. I was surprised by the level of calm Tango showed. He knew I was not right and he did not act up. 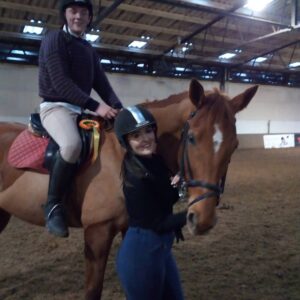 For the last 3 years, we have been able to work with him, educate him, take him on long show journeys, and win, win, win. For a horse who was not supposed to be able to do anything, it must have been a surprise to be affiliated for his 12th birthday. He was again Chestnut Colt 13 with a big future.

Now in the beginning I talked about Tango’s eyes. Tango has a condition called Hanging Grapes in his left eye. This is where the Corpora Nigra collapses downwards occluding part of the lens. 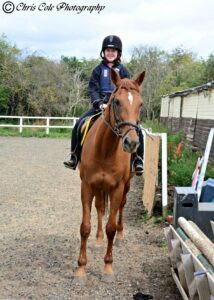 I was told by the vet that Tango had in 2014 a 25% occlusion and that it was going to get worse. I was told that Tango would probably lose all useful vision in that eye by the time he was 13. Well, Tango is a wonder horse and somehow he reversed part of that. Today he has about a 15% – 17% vision blockage. I will tell you now that he can certainly see the jumps – the higher the better!

I am not going to lie to you and say that Tango is reformed and utterly trustworthy. He still has his moments. He will still try it on with Wulf and he will lose.

Most of his misbehaviour now is from him feeling ignored. He knows that he is the centre of Beowulf’s riding world and he wants to have every moment of it. He now accepts love and can cautiously give it. Tango has a very limited number of riders: 3 to be exact. I am not one of them. I am his trainer and as such he respects me. He knows I never gave up on him and I never will.

Charlie, What IS he doing?

Tango’s best mate is Charlie and Tango serves as Charlie’s Lieutenant in the herd.

The two have shared a cross moment, and Tango has lost every time, so he has given up and accepts that he is Number 2 (if this was Star Trek he’d be Number 1). Tango serves as one of the lead horses when the

Handlers do a Formation Ride because if his leadership. He has even learned from Charlie to politely eat a doughnut from me (I’ve just been told he also likes cupcakes – thanks Wulf!).

I am not sure which one of us found our pot of gold – Chestnut Colt 13 or me. He is now living the life he deserved. I now have a son who has a horse to take him places. Together they are dynamite and I could not be more proud. This 17 hand 2 Irishman proved that the Love Offensive works and creates miracles where none could possible have been seen. 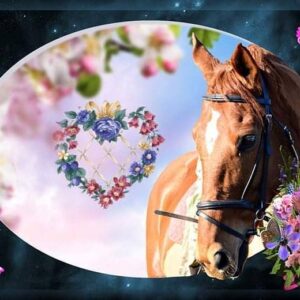 This post would not be possible without the help and beautiful photos from Chris Cole Photography, the many Sunshine Handlers and an overly proud Dad.  Thanks Y’all!