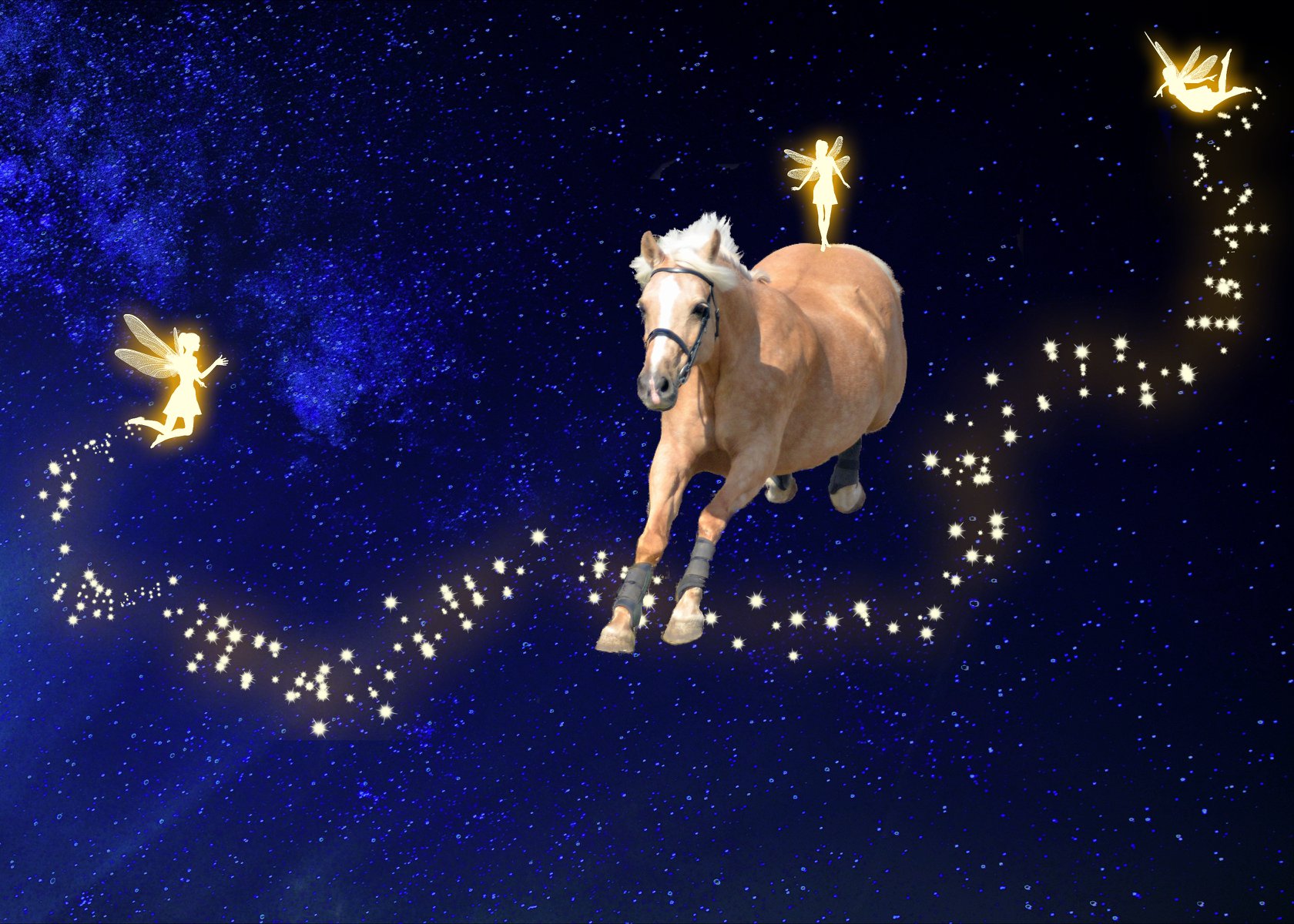 I’m a Barbie horse in the Barbie world
Leap over cross stick, it’s fantastic!
You can brush my hair, and groom me everywhere
Imagination, life is your creation

Yes, Molly is our Barbie Pony – a beautiful 14 hand American Golden Palomino with a flowing blonde mane and tail. She is what every little girl dreams a pony should be. That being said, our Molly is a handful.

This is Sunshine’s third Molly. The first Molly was here in the late 1980s (along with Dolly and Polly – “The Ollies”). The second one was a Burghley Horse I adopted in 2016. That Mollie was chestnut New Forest with a big jump. 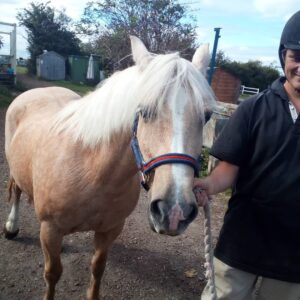 This Molly is also a Burghley Horse I adopted in September 2019. She also has a big jump.

It must be something about the name as we have had some issues with this Molly, similar but different to the previous one. This Molly is lovely to handle on the ground and to groom. Molly likes being in a lead rein class but looses her mind in an upper level group lesson. It came to a head in December of 2019 when she took one of our best riders all over the field in an insane panic that included bucking, rearing and bolting. This had gone beyond bad behaviour and was fast becoming a dangerous situation.

I am not one to just pass my problems on to someone else. For a horse to behave that way there must be a reason. She was not like that when she first came to Sunshine so what was causing the change.

Yes, I like a good mystery. I started by looking at her body. Was there a physical issue such as bad feet or previously undetected muscle injury?1 I found none so I moved on to her teeth. A previous mare, Tuscany, had behaved very similarly when I first started working with her and her problem turned out to be a Wolf’s Tooth. So I asked Simon to stick a thumb in her mouth and rub along the gap. He pulled his finger out quick and declared, “There’s something bloody sharp in there!”.

So having my answer, my next step was to call the Vet, Dr Laura, and have the tooth extracted. We all believed this was going to be a simple process that would take less than an hour and could be done on the same day that Annie was sedated for the farrier (yes, Annie has to be sleepy or dopey [any of the dwarves will do except Grumpy!] so that her feet can be attended to). I arranged for our Apprentices to be here to watch, learn and assist. I remember that Tuscany’s extraction took 45 minutes followed by 6 weeks of healing. It was good plan. The only problem was I didn’t discuss it with Molly first.

So Dr Laura arrived and sedated the mares. She began working and it wasn’t going to plan. The tooth wouldn’t budge. Molly woke up. Annie’s feet get done while Molly was re-sedated. Tooth refusing any movement. Molly wakes up again. Molly re-sedated again. After 3 hours, Dr Laura, now exhausted and frustrated, finally was able to get that tooth out. The Apprentices had already gone home and those who remained, including Molly, looked like they had been through the battle of their life. And to top it all off, the tooth, although sharp, wasn’t very big.

I don’t think I’m putting mildly when I say that Molly was a bit peeved with us. Her jaw hurt and now she wasn’t eating very well.

If you came near her, the ears went back and she would plant herself at the back of the stable. It was probably a good thing that the Handlers weren’t there the day of the extraction because Molly refused to have anything to do with anyone who had been present. It was the Handlers who loved her into accepting the yard staff again.

Because the whole Wolf’s Tooth incident was so traumatic, I was reticent to put a metal bit back into her mouth. When it was tried, Molly became very agitated and I do believe it was because she was frightened by phantom pain.

The level of memory is as varied as the horse, but one thing all horses remember is pain and who or what caused it. To make riding pleasurable again for Molly, I decided to start her on a Doctor Carter Bitless Bridle. This bridle works by having crossed leather thongs under the horses chin which will draw the head to the left or right as they are attached to the reins. We purchased this bridle originally for Rosie, but since Rosie isn’t ridden the bridle was only gathering dust. At first Molly didn’t know what to make of it, but soon she was happy with it. Her saddle became the next issue.

Horses like humans change shape every season. It is all based on diet and exercise, and for horses, their stress levels. 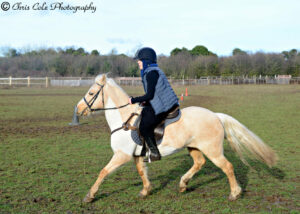 Horses loose weight when they are stressed (I wish this was true for humans – I’d be a size 0!). I think we can all agree that the tooth caused a lot of stress for Molly. Her saddle wasn’t fitting and was slipping every-which-way-come-Sunday. A saddle which seemed to fit her through the back and shoulders had been found, but it required a special 5-point harness. It was also a touch long. Molly was now very fussy and knew that if she said something I would sort it.

So what did Molly say? Molly said, “I hate my saddle, so change it!” by bolting off with Amy, who has been riding fizzy, crazy horses since I first met her 5 years ago.

Amy thought Flo was amazing good fun and only giggled when Starsky tried to buck her off. Amy controlled Molly and brought her back to me and we had a good look at the saddle (I didn’t fit this one). I could see was sitting on the croup and poking her lower back. This meant it was too long – she needed at 16 inch saddle not a 17 inch saddle. If the saddle was pulled forward to not interfere with her back, it was too close on her shoulder which meant she could not move her front legs freely. It was also rather heavy.

We took Molly back to the yard and began the Hunt For A New Saddle. Now I remembered I had fit her with a brown saddle in the autumn and the current, non-fitting one was black.

I told Simon I wanted a 16 inch brown saddle and he gave me a look that was a mix of sarcasm and despair. It was 6 or 7 saddles later that we found it. The next day, Amy rode Molly in our menage with the new saddle. It was clear that Molly was much happier and was transitioning up and down with what could be called horsey glee. Yeah! Problem solved. Or was it?

So this week (yes this coronavirus lockdown week) Lauren was trotting our Barbie Pony and she told us that she did not like her 5-point harness. It was the done in the usual method, 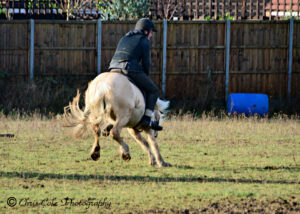 but Lauren is an amazing rider (I’m very fortunate to have so many in my life) and she was able to sort her out. Looking at how the harness was fitting, it was rubbing on her shoulder and Molly is particular. So we found a gel-pad to add some grip and took the harness off. We also discovered that Molly was very built up and strong on her left side but not so much on her right. This had been hidden from view by the harness. So we are now working her on her right rein to get some muscular balance.

Today Huw rode Molly in the grass school. She looked the happiest I had seen her since Burghley. Her saddle and bridle fit and don’t hurt or rub. She is working on exercises that challenge her but not wear her out.

She now has the confidence to know that we care a lot about her and will give her what she needs to be both comfortable and to develop into the jumper she wants to be. Now that Molly has the tack and the health to jump, she is content to take on the challenge and have fun doing it. It takes time for a new horse to both settle into a new home and routine, and to settle into the tack it will need to do what it wants to do.

I am glad that Molly is here. She is a lovely lady with a positive attitude. There is much to worry about with our lockdown, but it has given us the time to work with our horses, check and change what needs to be, and make sure they are still happy with the work we ask them to do. Molly will be a real asset for us this year and for years to come because we have taken the time to listen to her. She may be a Barbie-girl, but she is an honest one. 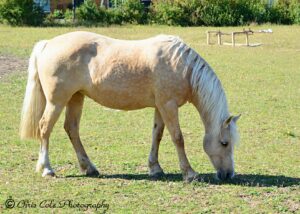 This post would not be possible without the many wonderful riders who are taking the time to train Molly and skill of Chris Cole Photography who manages to catch just about everything.  Thanks y’all!