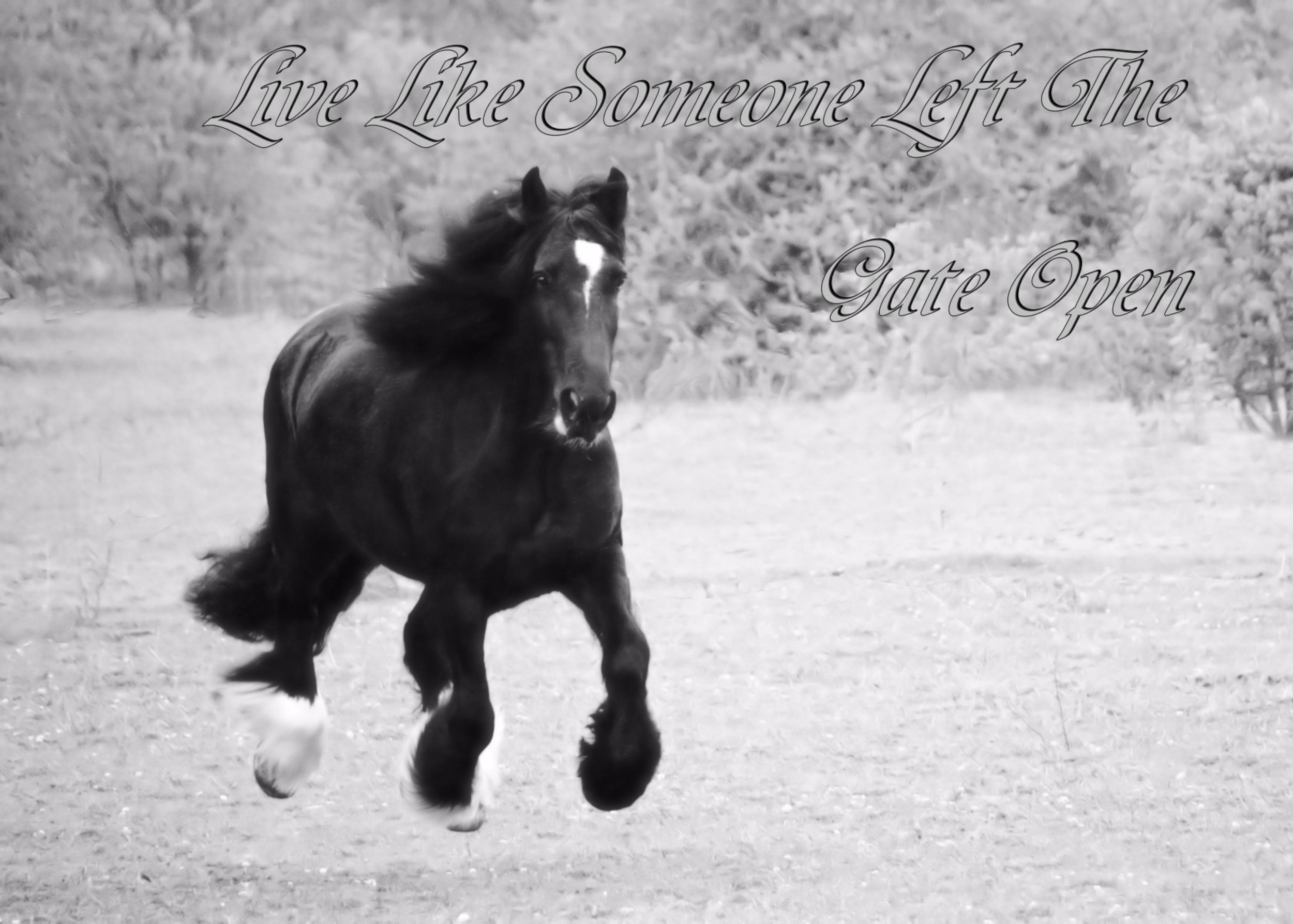 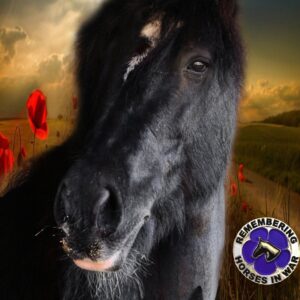 In so many ways, she is the face of Sunshine Riding. She is both a Schoolmaster and a source of unending frustration. She is protective and liberating. She is both kind and challenging. She is Pure Magic.

For any adult or teenage rider, Magic is their first choice. She is a 16 year old, 15/2hh black Shires x Dales lady. Obviously trained for dressage as a young horse, Magic has also taught so many riders how to jump and jump well. 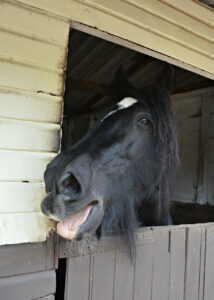 The real challenge is when you leave the saddle of Magic and then jump on the likes of Stan, you quickly find out how much she took care of you.

I first saw Magic in a picture many years ago on a google listing. I felt a bit sorry for her because she was standing in a field un-groomed and covered in dirt. She looked like she hadn’t been worked in a while. It was not a complementary photo. She was a young horse and it looked like there was a big personality. Upon meeting her in person, Magic proved to be more than that.

One thing you might notice about Magic now and Magic 7 years ago is her mane. When I arrived at Sunshine, Magic’s mane was “hogged”. This means it was cut or clipped close to the top of her neck. The original purpose of this is so that the horse’s mane doesn’t interfere with their tack, especially if they are wearing a pulling collar. Magic doesn’t pull. The reason that was given to me for hogging the mane was that it would be easier to groom her because she has a thick a mane. I was not impressed. 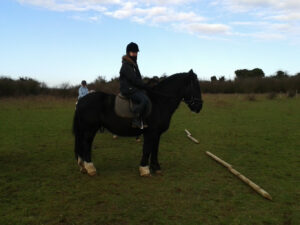 So Magic’s incredible mane became one of the items on the list of “Things I Am Changing” when I fully took over. I can understand the rush of the grooming when a riding school is busy and that hogging a thick mane can make life easier. However, Sunshine was not so busy that her mane could not be attended to properly. Over the last 7 years, Magic has had a trim as needed and her mane has been thinned a few times, but it has been allowed to grow to its full glory – and what a glory it is! She is a walking, trotting, hair-flicking shampoo ad.

Another thing that came to light with consistent deep groomings is that Magic is actually a black-on-black dapple. This is not a common feature. It is technically known as The Leopard Complex where dark or darker spots appear on the horse’s coat. It is a genetic trait and you are probably most familiar with it when I say Appaloosa. Magic is a True Black horse, which is uncommon but not rare, and that means she does not bleach out in the sun to a chocolate brown (like Henry and Dottie). Her spots show most in the summer when her coat is at its thinnest, and they form a blanket across her hind quarters. It is beautiful to see and marks out her paces stunningly.

Magic does have gorgeous feathers as well. I don’t really know why when a horse’s lower leg is covered in long fur it is said to have feathers, but they do call it that. 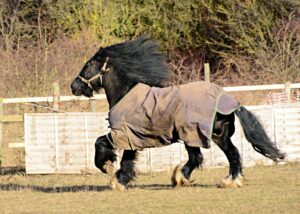 Feathers are common in Northern European equines and is more than likely an environmental mutation to keep the animal’s legs warm in deep snow or mud. It is commonly found on draught type horses. Magic has them as does Annie (Irish Cob) and Pasha (Dartmoor), while Charlie (Ardennes) has them on his back legs but not his front. All of these are “hearty breeds” which can stand being outside in the cold of winter without a rug (I rug anyway because I truly hate the mud they find!).

As beautiful as feathers are, horses with them are prone to an insect infestation called Feather Mites. Magic gets them. It is very hard to get rid of the mites, which bite and cause itching and possible infections. Imagine having a mosquito bite and your only way of relief is pounding your feet so that your fur will relieve the itch. There are several ways to deal with mites. One way (which I consider rather drastic) is to cut all the feathers off – no feathers, no feather mites (we are considering this with Annie as her feathers are a complete mess anyway). 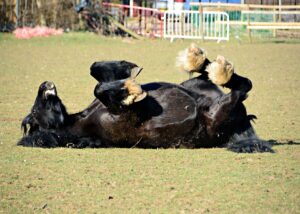 Another way is to wash the feathers in a specially made, store bought mite killing shampoo. If the mites are very bad, then the Vet can prescribe a medical shampoo, but it costs a bomb. The last way, and the way we deal with mites at Sunshine, is to have an injection which affects the horse’s skin and causes the mites to die. This treatment method was originally created for cattle, and I remember when it was first made available to horses about a decade ago. As it is a cattle treatment, you do have to sign a consent form, but I have never had trouble with the Mite Jab on any of my horses. Yes, Magic is due one this year and from the amount of hoof stomping in both her stable and under saddle (not a nice feeling!), it will be done sooner rather than later.

As you can see I am a lover of grooming Magic. She is a beautiful horse who loves her beauty treatments. The sad thing that happened in Magic’s life is the contraction of canker. Canker is a permanent infectious process that causes a chronic hypertrophy (i.e., enlargement or increase) of the horn-producing tissues of the equine hoof. The disease generally originates in the frog,

but if left untreated, it can spread to the adjacent sole, bars, and hoof wall. It is seen commonly in draft breeds, but it can occur in any breed of horse. One or multiple feet can be affected at the same time, but it tends to affect the hind limbs more frequently. Canker appears like Thrush, another common bacterial hoof ailment, but its treatment is very different and must be overseen by a Vet in conjunction with a farrier. Thrush is often the result of wet conditions and poor hoof care (something I am a real unpleasant person about if I spot it), but Canker can appear even if the horse has perfect hoof care. There is a study out currently regarding the presence of the bovine papillomavirus and the development of Canker. Let us hope this leads to a cure.

Magic had spent the summer and autumn of 2013 (I was a livery then at Sunshine) being treated by the usual Thrush remedies and her previous owner refused to bring the Vet in when nothing worked. I was told in May of 2014 to consider putting Magic down because this disease was not curable, would be expensive and require a lot of care. I refused to do it because I will not end someone’s life because they require a bit more management than someone else. 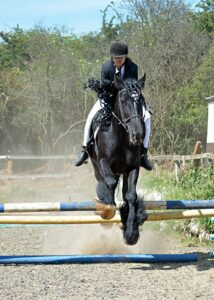 Therefore we are very quick to act on any sign of Canker flare-up, Magic has been able to work properly and compete for the last 7 years with barely any interruption. So this disease is manageable. It is true that this past autumn Magic had a serious flare-up in both of her hind limbs. It has taken 5 months to sort, but she is now good and healthy. The only real problem is the mental scars from the pain and discomfort. Because her frogs were nearly destroyed (they have since regrown), when one goes to pick out her feet, Magic lashes out fast with the hoof. I will tell you that Magic’s kicks hurt. A LOT.

So how does one deal with equine psychological issues? 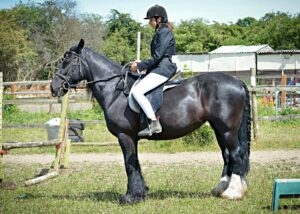 The same way you would if it was your child. You show patience, care and most importantly time and love. Will Magic get over it? In time and as long as we keep a constant eye on her feet. She is now healthy, so our next real step is to get her back in shape again.

Box rest, like bed rest, is no friend to an athlete. Magic gained weight. A lot of weight to the point she was obese – which didn’t help her feet. Magic topped out at nearly 680 kilograms (she normally weighs in at 560 kg). 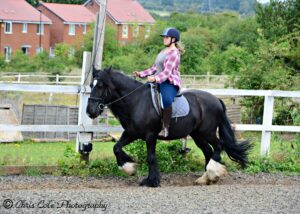 When we came to put her saddle on, it sat on top like an ornament. She was Therewell Pony (google it for some laughs). So we started walking her because this was the best and safest exercise we could give her. Yes, we did manage her feeds, but she is a hearty horse and does not really loose weight in the winter. When we had our Annual Inspection, we did explain it all to the Vet who was very understanding of what had happened and what we were doing. He agreed she needed to loose a lot of weight but in a sensible manner. Magic learned to walk miles and soon the saddle did fit. Next was a lot of groundwork to rebuild her Top Line – these are all the muscles of her back so that she can support herself and a rider. I won’t say it is 100% there yet, but she is getting a lot closer. She is still a bit round, but she is also now strong enough for lessons and hacks. Jumping will be very limited due to both her fitness and her feet.

One last thing about Magic is that she is one of our 3 Disabled Rider horses – Crystal and Pasha are the other 2. Magic knows instantly when she has a rider who needs extra support mentally, physically or emotionally. Magic will protect them but yet let them develop as riders in their own right. 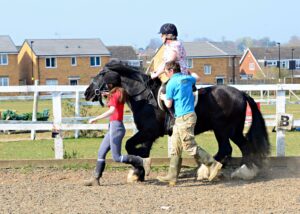 One of Magic’s greatest days happened in the Summer of 2018 when she gave a rider of 30 years her first canter – something this rider was told she would never be able to do. The Rider cried, the Instructor cried, I cried – all for joy, while Magic looked like a proud Mama. She had taught her rider well. This is a gift very few can every give another.

Pure Magic is just that – amazing, cheeky, funny, frustrating, joyful, talented, a bit of an exhibitionist, a competitor, a woman of love.

She is the Alpha Mare and acts as Auntie and Godmother of June (it’s so funny to see June get confused as to who her mother is sometimes!).

She runs her herd with a calm but definite demeanour. She loves her competitions and is a regular winner at whatever she decides she doing. In Magic’s mind, “If it is worth doing, then do it right”. I love riding her and she has brought even me back from the despair of never riding again.

Knowing the love of Magic makes you a very special person. Magic, like Charlie and June, will spend all her days with me at Sunshine. This is her forever home and she is one of my Forever Ponies. 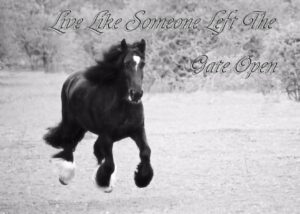 Thank You to “Auntie” Chris Cole who loves Magic almost as much as she does photography. Yes she is our baby.